The beauty of GTA V through selfies

I wrote this for Edge’s website back in maybe 2013, before it was swept away in some Future Publishing web strategy tsunami. I’ve always been quite pleased with it, so I delved into the Internet Archive to mount a rescue. 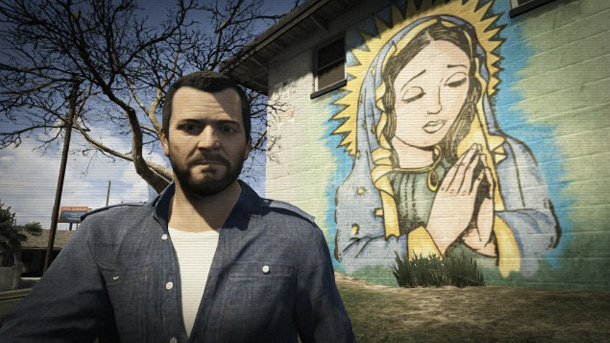 GTA isn’t just humping dogs and UFOs, strip bars, BAWSAQ and a mouse pointer with an erected middle finger. It’s not just lowball humour, nihilistic violence, misogyny and a seething pool of crass satire that seems to sneer at everything and everyone.

That’s all there in GTAV, of course, but we’re talking about a game with the scale of a state here. For all of the ugliness there’s beauty, too.

I’ve always loved GTA for its details – its ability to capture the sense of a place and animate it into somewhere that almost feels alive. I remember driving over the uneven and kinked roads of GTA III’s Liberty City and realising it was striving to capture a form of reality, not just live up to the standards games had tried to reach so far.

I don’t think any developer other than Rockstar North makes open worlds as rich and fully observed. It can be through some sort of modelling of the way things behave in the real world or it can be through a little art flourish; either way, I find these acknowledgements of reality exhibit a kind of beauty. They speak to the thoughtfulness with which Rockstar North’s developers have looked at reality and considered how to represent it.

The thing is, this stuff is often so well realised that it tends to get completely overlooked, while GTA’s big, bad, lurid side gets all the attention. But if you care to look it’s far more important. For me, it’s in how GTAV’s cars have slightly differently coloured headlights, the way you can light petrol trails with the backfire flames from your exhaust, and how each of the three protagonists have different smartphones (it’s so delicious that Trevor should have what looks like a Windows Phone).

And so I took out my camera, sporadically functional as it can be, and tried to record some of these details through the medium of the selfie. Because, well, why not. 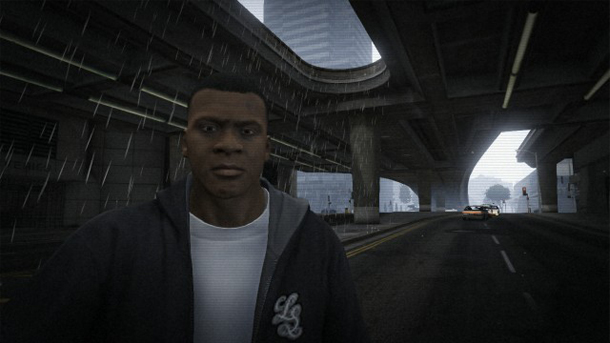 Rain falls only where there’s a clear line through to the sky, and the road is wetter there, too. Every game should have this in it, because they help a downpour feel like a downpour, with shelter actually feeling like respite.

This isn’t meant to be some sort of exhaustive haul. These photos are simply some of the things I’ve seen that tickle my verisimilitude gland and there is so very much more I’ve yet to notice. Yeah, verisimilitude. I went there. But there really is no better word. Let’s celebrate it. 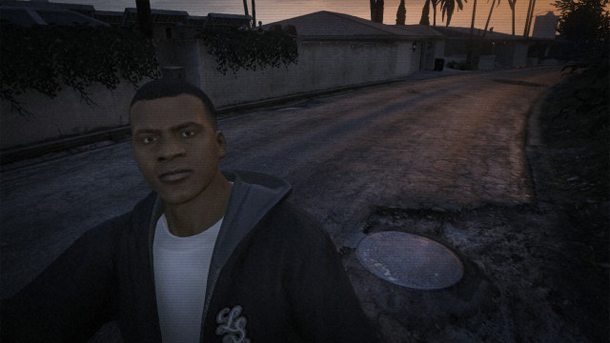 This must be one of the best-rendered road surfaces in the history of videogames. Cracked, pitted and shining against an evening sky, it’s up in the Vinewood Hills. I love that a manhole cover has helped cause the tarmac around it to have worn away down to its bedding layer. This is a road with history. 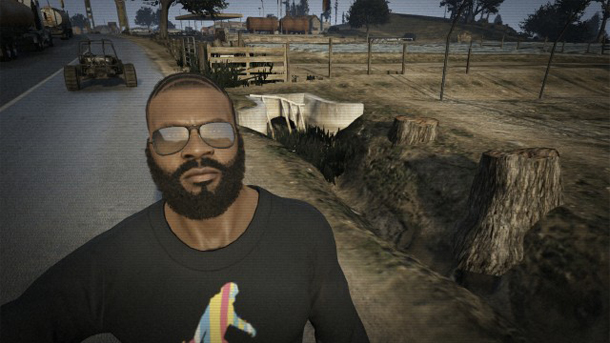 This is so wonderfully incidental – a drainage channel running down the side of the Great Ocean Highway still bears the stumps of trees that were cut down as it was being dug. 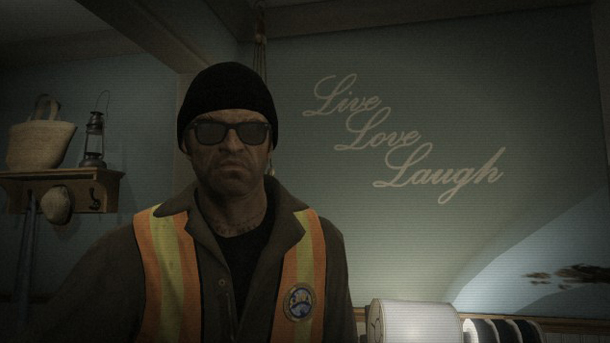 The characterisation of Trevor’s Los Santos safehouse is pin-sharp, sporting a nautical theme and cute phrases – the shit that’s soon smeared all over its walls are almost an improvement. In plan it’s actually based on Melanie’s apartment in Jackie Brown, though in effect it’s a very different place. 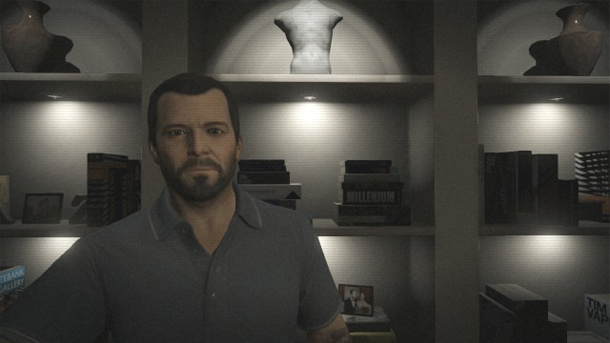 Michael’s house is filled with aspirational details, the most cutting for me being a copy of a thick book called Millennium on his living room shelves. It’s a clear nod to Century, an excellent 1,224-page book of photography covering the 20th century that’s found in any upwardly mobile household worth its salt (and probably idly thumbed through no more than twice). 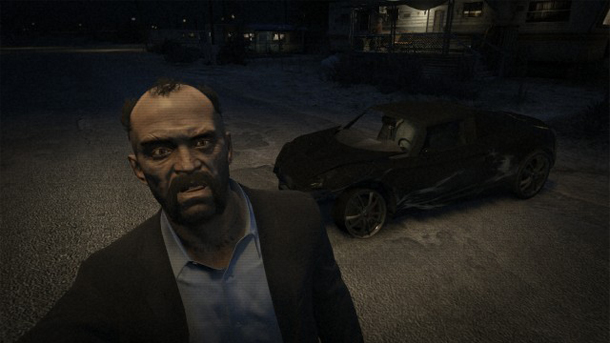 GTA V’s dynamic car damage modelling is fantastic. Ever since Destruction Derby I’ve loved smashing up videogame cars, and GTA V’s auto sadism has raised standards higher than ever. I have spent ten minutes punching and kicking a car into crumpled submission, only stopping because some ped decided to punch me to death. 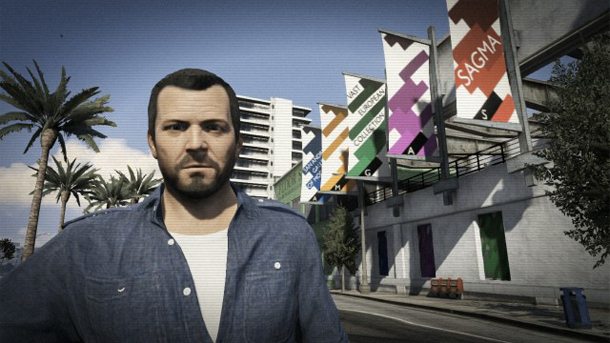 San Andreas Gallery of Modern Art (SAGMA) is really well observed, with its banners’ use of the art-stalwart typeface Gill Sans and situated in a building with precisely no architectural interest whatsoever, a nod, I like to think, to Los Angeles’ dearth of great public architecture, considering its significance as a metropolis. That said, it’s curious Rockstar North hasn’t attempted a crazy Frank Gehry-like edifice in Los Santos. 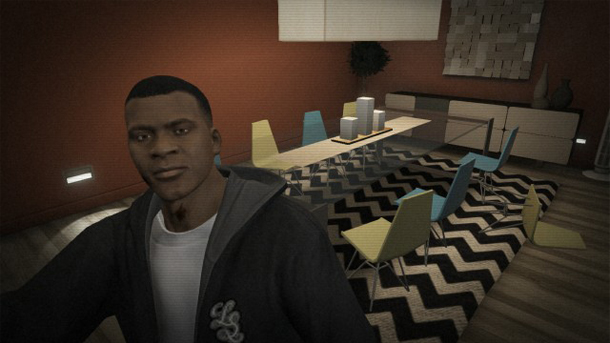 Franklin’s Vinewood Hills apartment is brilliantly empty and contemporary, deserving of an entry on the excellent Fuck Your Noguchi Coffee Table blog. Around his dining table sit Charles and Ray Eames’ Eiffel Base Shell chairs, a fine design cliche, sitting on what looks like a Madeline Weinrib Zig Zag Tibetan Carpet ($4,500). 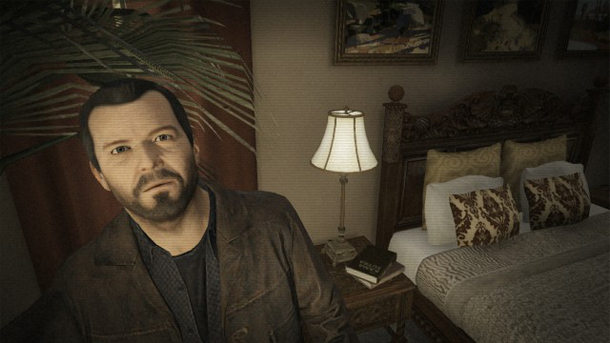 On Michael’s bedside table lies a copy of the Kama Sutra. It’s maybe not the subtlest detail, but his expression here, caught just after the mission in which his family ups and leaves him, is so plaintive it just had to go in.

GTA V is a game about hundreds – thousands – of details like these, each crafted by Rockstar’s artists. And every single one is worth it, allowing every player to notice something relevant to themselves and helping to pop San Andreas into widescreen focus just for them. They make somewhere so awesomely and gloriously sprawling ours.