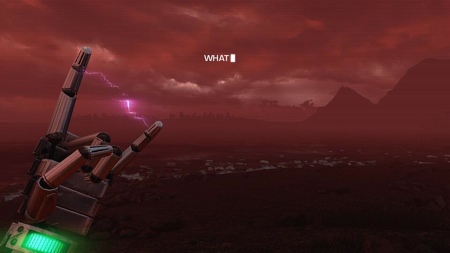 AGES ago, I reviewed for PC Gamer Ubisoft’s standalone offshoot of Far Cry 3. Blood Dragon is an odd game, engineered to achieve multiple aims: to get the internet LOLing at its 80s action game stylings; to reuse as much of FC3’s graphical assets as possible; and to somehow fit into Far Cry’s Heart of Darkness-y pondering of the nature of masculinity and unfettered violence. It kind of works! At least in the sense that chops away anything that gets in the way of running, leaping, driving and firing guns. But the screenshot I took above kind of epitomises my thoughts about it.

I’d just dropped the kids off at school when one of the fathers asked me what games I was playing. He’s no gamer but I thought he might at least gel with the concept of Blood Dragon: a sci-fi shooter and heavy pastiche of ’80s action films, voiced by Michael Biehn. You know, out of The Terminator. Neon, synths, one-liners, chrome, ultraviolence, pixel graphics. He looked confused, maybe appalled. I faltered. “It’s kind of, well, a joke.”
→ Read in full at PC Gamer