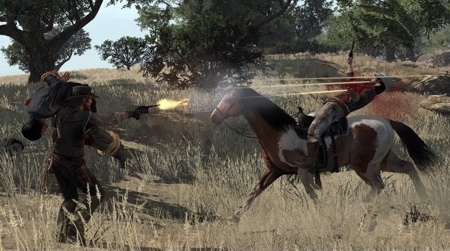 I finished Cormac McCarthy’s Blood Meridian last week. A story that follows the bloody trail of a gang of scalphunters as they murder their way across Texas and northern Mexico in the mid-1800s, it’s at once monumental and biblical, harrowing and graphically violent. It’s really stuck with me.

One of the many things I admire is its vision of the American (and Mexican) West as an ancient land, with a long history of people having come and gone before Glanton’s gang ranges across it. It helps to set base action – slaughter, rape, torture, disease, poverty, decay, hunger, greed, destruction – in the realm of something more timeless and fundamental: an examination of man and nature stripped of civilisation. But it’s still remarkably immediate. I didn’t realise until after I finished that the Glanton gang is based on a real one, which used the bounties on scalps made by various Mexican townships under attack by marauding Apaches as an excuse to go on the rampage for gold and blood.

The world Blood Meridian depicts is morally abhorrent, but it’s still somehow internally logical. The philosophical keystone is Judge Holden, an awesome figure, described as being seven feet high and hairless, and usually naked. He continually studies the natural world, drawing it, taking samples, and explains to one of his fellow gang members that he does it because, “Whatever in creation exists without my knowledge exists without my consent.”

He steadily lays out other such brutal ideals throughout the book, and one of them concerns the importance of games – principally betting games and sport, but it struck me that it gets at something fundamental about why we play.

Men are born for games. Nothing else. Every child knows that play is nobler than work. He knows too that the worth or merit of a game is not inherent in the game itself but rather in the value of that which is put at hazard. Games of chance require a wager to have meaning at all1. Games of sport involve the skill and strength of the opponents and the humiliation of defeat and the pride of victory are in themselves sufficient stake because they inhere in the worth of the principals and define them. But trial of chance or trial of worth all games aspire to the condition of war for here that which is wagered swallows up game, player, all.

I think that there’s a lot of truth in the idea that games are an elemental part of humanity, their abstractions of the rules of war and taking from others by force play on the ancient impulses that take us to those acts. We live for conflict in some form or other, and games can be a safe place to practise it.

Blood Meridian depicts pretty much every kind of mutilation and suffering I can imagine, and there’s a lot of it, too. But that’s not a criticism, because it proves that violence is just as much worthy of portrayal and reflection as anything else. Perhaps more so. Violence in videogames, though, is often dismissed as unnecessary or juvenile.

The Last of Us, in which you have little agency other than to hit things or shoot them, came under particular fire for this recently. I agree that some of its lingering animations of bludgeoning and smothering do seem to take a pleasure in the act that is less about articulating the character’s part in it than a pornographic attempt to satisfy players’ desire to witness it. But I have no problem with the central role violence plays in the game. It’s the player character Joel’s main means of self-expression; the way he gets his way in a world without civilisation. It’s fitting, and the game explores the repercussions of Joel’s actions on himself and his relationship with Ellie quite well.

I’ve always been a little uncomfortable with the general argument that videogames are too violent. Whether they depict it well is another matter, but violence is such an inherent part of ourselves and, as the Judge says, the reason why we play games that I think it’s completely valid that games should attempt it. Especially as so many other forms of media are so concerned with violence. Whether as a result of the fear of violence or the desire to commit it for self-protection or to dominate, it drives most drama.

So why shouldn’t it drive many games too? I think there’s a kind of truth in the naturalness with which games depict and are underscored by violence – it’s part of the grammar of humanity.