Since New Year’s Eve I’ve been quietly wondering whether there’s a really good game you can play at a dinner party with a good variety of friends. You know, both game players and not. Jocks and nerds – the mix.

To end 2011, we took part in a murder mystery dinner party at a friends’ house. It was based on a boxed game called Death By Chocolate. A prominent American chocolate maker called Billy Bonker has been found dead, and for some reason a peculiarly colourful set of characters have gathered for dinner, and one of them did it.

Me? I was Sigmund Fraud, a Viennese psychiatrist. My wife was Dame Barbara Carthorse. Other characters included ‘Chocolate’ Bertrand, a Belgian chocolatier, Mike Bison, an American (played as an Cockney for reasons of accent fidelity) boxer, and ventriloquist Little Fitz. 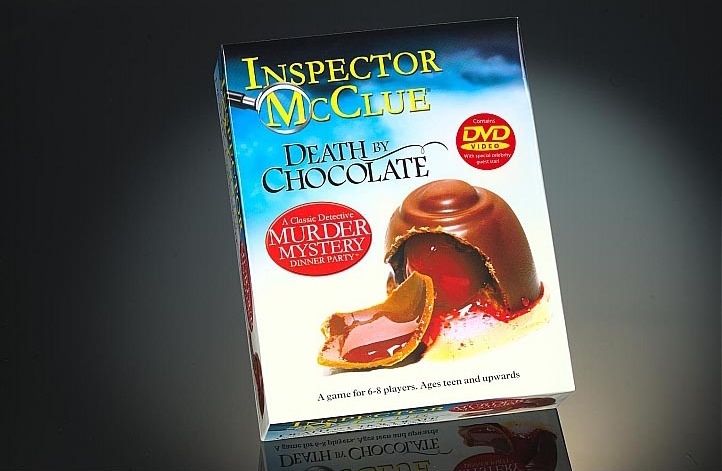 Despite a surprise cameo by Michael Winner on the DVD, it didn’t really work. Mostly because it’s not really a game, despite the latent suggestion that the aim’s to figure out whodunnit.

The problem is that it’s pretty strictly scripted, in the sense that the game doles out to each player clumps of information and specific questions to put to others in a succession of rounds that are timed to fit with a three-course meal. That means you don’t know whether you’re the murderer until the end, and it also means you don’t know a lot about yourself.

At the same time, the game encourages you to probe the other players about their movements and motivations – but they frequently don’t actually know the answers because their character cards haven’t told them yet. I even got asked an official question to which I never learned the answer.

So Death By Chocolate is a very authored experience, and the result is that you play in a constant state of mild confusion, never really getting into the role and always consulting your card to find out what you should do next.

I can see why the game’s designed this way, of course. The rigours of marshalling a slightly drunken group of people into understanding a new game’s rules and then playing by them are a big challenge for a host – being provided with the material instead is a lot easier. And you can’t really hold a dinner party with a game board set up in the middle of the table and ask the attendees to nurse a set of cards and counters.

Besides, many people just aren’t interested in games. They may like stories, which Death By Chocolate cheerfully provides in full, but many are put off by the idea of competition and complication that playing a game implies.

But surely there’s a whodunnit-style game that can provide all the intrigue and social fun the promise of a murder mystery dinner party promises, while being defined by game rules, not scripts?

Friends and I have been playing the Battlestar Galactica board game recently, a fantastic experience that, because of its board and cards, complexity and sci-fi setting, I couldn’t possibly recommend for a dinner party, but which nonetheless suggests some blueprints for a game that can.

In it, the players take the roles of various characters from the semi-recent TV series, all trying to survive various disasters, from Cylon attacks to contaminated water supplies, for long enough to return to Earth. To succeed, they must work together, but here’s the rub: one or more of them may be Cylons who are sabotaging all their efforts. 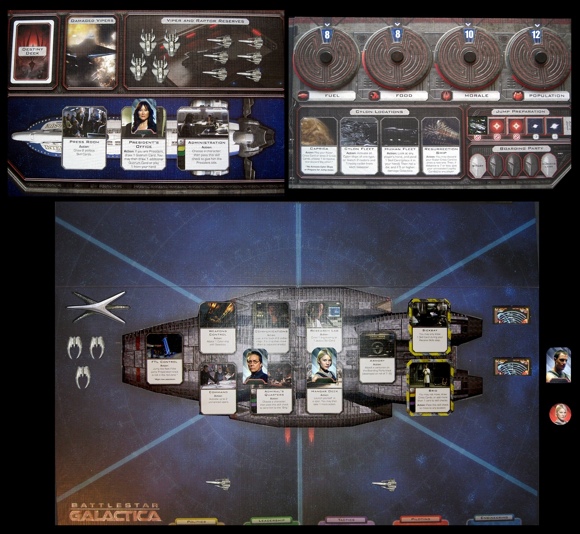 The result is a delicious confection of threat, suspicion and panic, principally formed by your fellow players’ actions. As such, it’s an intensely social game – most of the time you’re talking, trying to figure your way through catastrophe or second-guess suspect Cylons.

Another other game is Werewolf, also known as Mafia. Though, at the risk of completely undermining my carefully cultivated nerd credentials, I’ve never played it.

Here, the players are a group of villagers, but among them are two werewolves. During the night phase the werewolves will choose to kill a villager. During the day phase the villagers will decide to lynch someone they suspect is a werewolf.

The rules are all about generating discussion; there’s no board or other accoutrements to get in the way. Here’s Andrew Plotkin, who created the Werewolf version, on what goes on in the game:

These games’ stories are merely scene-setting – the rest is written by the players themselves, so they don’t suffer the lack of information that undermines Death By Chocolate. And because every decision in the game is defined by the game rules and the actions of your fellow players, you don’t have to consult a little card to know what to do next. In the best sense of the term, you’re role-playing.

In short, they’re better games. Question is, are there more? And is there a perfect rule-based whodunnit for a dinner party?