In awe of David Carr 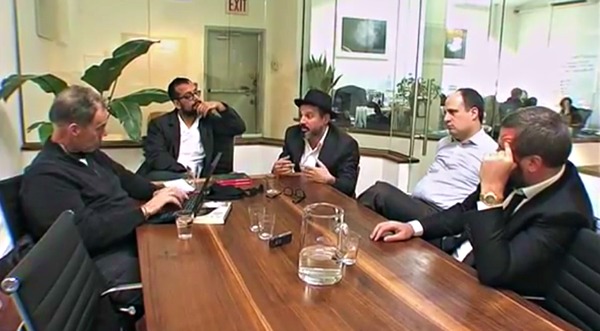 Having watched the documentary Page One: A Year Inside The New York Times, I am now totally in awe of the newspaper’s media and culture columnist, David Carr.

There’s an incredible scene where Carr is interviewing the heads of Vice magazine for an article on how Vice is diversifying its output in the face of the rising power of the internet. The team has recently made The Vice Guide to Liberia, a video that presents fighters claiming that they kill children and drink their blood before battle and a beach littered with human crap.

Carr’s interview style is amazing – laptop open in front of him, fixing his subject with a gimlet eye and furiously bashing out their words as they say them. His spacebar gets an especial hammering. And yet he’s intensely focused on what they’re saying, never letting them say anything other than what he’s after. He’s galvanising and totally in control. My skills now seem particularly feeble.

I should say now, by the way, that Carr is remarkable all over. Now in his 50s, he was editor of some local newspapers, a cocaine addict and brought up his children alone before joining the NYT. He’s leathery and rangy, his back and head usually bowed, but his pop-eyed face always keenly raised. A bit like a vulture, actually, but somehow highly charismatic. He seems pretty likely to be a bit of a nightmare to actually work with, opinionated and keen on being in the spotlight from the way he comes across in Page One. But hey, I like him.

Anyway, here’s an excerpt from his interview at Vice, with co-founder Shane Smith (ripped from a transcription by New York Magazine):

Carr If you’re a CNN viewer, and you go, “Hmmm. I’m looking at human shit on the beach…”

Carr Just a sec, time out. Before you ever went there, we’ve had reporters there reporting on genocide after genocide. Just because you put on a fucking safari helmet and looked at some poop doesn’t give you the right to insult what we do. So continue.

And Smith does, but kinda taken aback. Carr is completely in charge. That’s how to interview someone. Unfortunately, none of this is in Carr’s resulting piece – though I like to think a little irritation comes through. I suppose that’s professionalism.