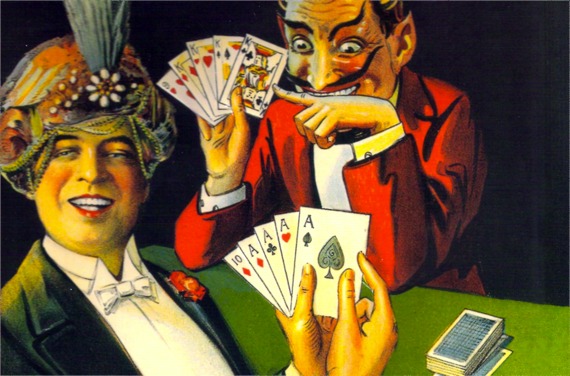 Look at the journey of a new idea, from its origin in greasy workshops and grinding machinery to showroom floors, or from the inscrutable mind of a genius to a gleaming plaything in your hand. It seems to me that the biggest sign that a technology is ready to take over the world is when it starts to think about the people who will use it.

It’s something that I think is key to Glen David Gold’s Carter Beats The Devil, a book about a magician in the San Francisco of the early twentieth century. He’s based on a real person, but the story is largely fictional, a rollicking ride through scarcely credible adventures which include the death of a president, an attack by pirates and meetings with a pioneer of television and the founder of BMW. Through the eyes of Carter, a rich man with a fascination for technology, we see a time transforming through the advances in intercontinental travel, telephony, the car (and motorbike), and the future promise of mass-media.

In fact, the book makes these innovations seem a lot like magic. It’s fitting, then, that one of the book’s preoccupations is with explaining how Carter’s magic shows work. Not so much in grand explanations of the secrets behind them, but in descriptions of their staging - how they’re paced and presented - using technology. In Carter’s world, magic is a combination of technology and dramatic flourishes. Both are borrowed from other magicians and adapted and improved upon for ever more elaborate shows: in Carter’s world, presentation and the audience are everything.

And the idea that Carter can telephone his agent in New York is magic, too. It’s brute technology realised as a knurled domestic object. The same for the motorbike, a complex composite of precision engineering with knack for cool speed that Carter finds impossibly alluring. Carter knows that technology is nothing without a little drama - some mass appeal to give it meaning.

I’m sure it’s no accident that the book is set in San Francisco. Back then, this was a city that was building its own identity to challenge the cultural hegemony of the east coast - well, rebuilding, given how recently the 1906 earthquake had hit. Now, of course, it’s the thriving centre of the world’s internet. Given the death of the space race and the fact that we’re not eating food in the form of pills, the best magic today is in the instantaneous reactions and associations of data flows that San Francisco’s inhabitants have trailblazed.

What these people have learned over the twenty or so years since the internet reached the general population is the importance of presentation and audience. Magic is something that has to delight the throng - Facebook’s magical unending and ceaselessly contemporary list of your friends’ activities is sculpted from technology to celebrate the form of the social swirl. Apple calls its iPad ‘magical’ because it wows the crowd.