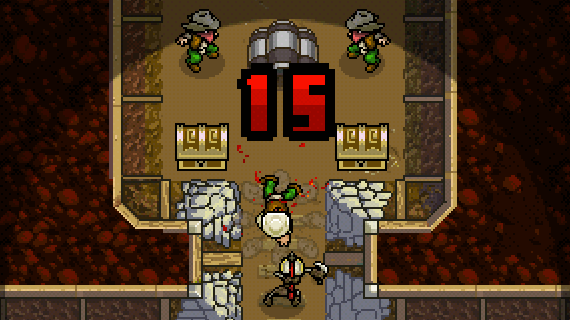 Current total obsession: 100 Rogues on iPhone. And by a long, long way, it’s not being played enough if a figure of 946 players on its Game Center scoreboards is anything to go by.

That’s because 100 Rogues is one of the most consummately crafted games for a mobile device I’ve come across. Not bad considering that until the latest update it crashed and wheezed with staggering abandon on my iPhone 4 and features an interface that, if you’re not grumbling at its convoluted menu, you’re cursing because it’s gotten you killed.

100 Rogues is a perfectly honed Rogue-like for the touch generation, which is to say that it’s the direct descendent of one of gaming’s oldest genres: computer Dungeons & Dragons. You take your Crusader, Fairy or (new addition) Skellyman into a dungeon with the laudable aim of killing Satan. As you descend though its five- or six-room randomly generated levels, you’ll kill monsters and gain experience and find chests and gain equipment. Experience means levelling up and gaining skill points which you can spend in each of the character class’ finely balanced and wonderfully differentiated skill trees.

Here’s the rub: like in most Rogue-likes, when your character dies, it dies for good. Because, as developers Dinofarm Games and Fusion Reactions say on its website, “100 Rogues is about player improvement more than character improvement”. That’s to say, rather than the game steadily improving your character so it’s better at facing the game’s challenges, the game teaches you how to play so you’re better at facing the incredible tests it’ll present you.

Brilliantly characterful pixel art is wed to a casual disregard for fantasy canon, happily throwing you against flying babies, sniping ninjas and knife-wielding cowboys. Each monster has its own special attacks and abilities, from the tele-swapping and fireball-throwing Gypsy to the skeleton-raising Necromancer. Some will crowd and batter you to death, others will reduce your armour to nothing and rain arrows on you from a distance. You’ll need to learn how to deal with them through trying and failing, making your way a little further into the dungeon each time. Sometimes, too, you’ll know what you’re doing, but you’ll get complacent, impatient or fatally fail to notice a danger - the fault’s always with you. Being turn-based, 100 Rogues never rushes you.

Indeed, your personal responsibility is the beauty of 100 Rogues. There’s also a lot to admire in the skills you’ll choose to invest in your character over each game. The heavily armed and armoured Crusader’s all about running in and hitting hard. The Fairy is a physically vulnerable magic user who can teleport about the place to avoid getting close to monsters while hitting with powerful ranged shots. And the similarly weak Skellyman is about movement, getting in close and vaulting over enemies to deal out backstabs.

It’s up to you to choose and perfect the strategies you want; I’m terrible at it, but like the best games, it implores me to try again after another stupid death because it’s made me feel just that little bit better at it.

So yes, I can’t recommend 100 Rogues enough. Put it this way: it’s not often that a bugged-out piece of rubbishy engineering turns out to play so magically.