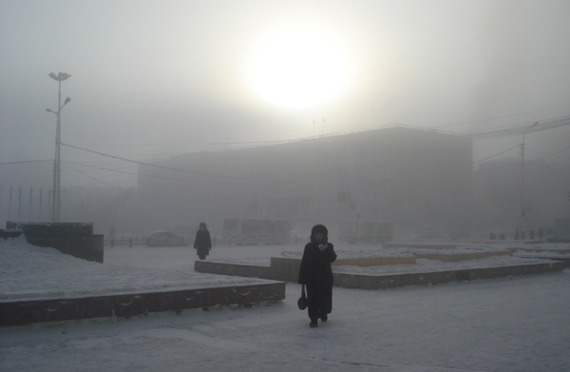 In Yakutsk, most buildings are built on stilts. Not because it’s sited on a swamp, or on the shores of some inland lake. No: Yakutsk is sited on Siberian permafrost. And it necessitates architecture that’s based on the need to avoid transferring heat to the ground below. You see, if it does, it’ll melt the permafrost, which, even during its 30C summers, lies only 1.5m below the surface. Because when the permafrost melts, buildings sink and collapse.

Many older buildings are wooden; you can tell their age by how low the windowsills have sagged towards the pavement. The city’s rooflines are bent and buckled, a topography that’s telling of a climate which can vary by 100C between summer and winter. Gas and steam for heating systems run through raised pipes, crazily bending to cross streets. Since 1970, 300 buildings have subsided due to all of part of their footprints thawing. And since 1990 the rate has been increasing. The locals mostly blame modern building standards, but the spectre of global warming, and what effects the widespread melting of the permafrost might have on Russia, and the world, looms.