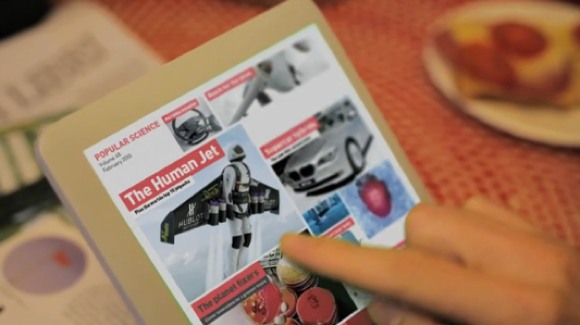 London design agency Berg has released a video presenting its fascinating proposal, made for magazine publisher Bonnier, for a tablet interface for magazines. Everyone’s doing it these days - Time Inc. released a video showing a prototype for Sports Illustrated, while a video of Conde Nast’s Wired tablet app appeared at Wired promotional event last month. All in preparation for the rumoured appearance of Apple’s 10-inch tablet in January.

It’s all at once fascinating, exciting and scary for paper magazine producers like me.

I think Berg’s design is the smartest of the lot, because it demonstrates the greatest knowledge of magazines’ strengths rather than attempt to simply bring video and connected information into a kind-of magazine layout. Designer Matt Webb knows them deeply, grasping in particular their quality of finality - that you have a finite amount of edited content to enjoy, a property which I think makes magazines more approachable and allows them to feel more complete, paradoxically, and therefore satisfying to consume than the ever-swelling nature of RSS readers and websites.

Sure, in a broad sense, the proposal takes iPhone interaction design and applies it to a larger screen. And it does rather emphasise the bounded nature of the screen - to see a spread you must turn the tablet to landscape and zoom out; to read a column it’s best to turn it to portrait and zoom in. And though swiping left and right quickly allows you to browse adjacent pages, and there’s a neat visual trick which gives a sense of how far through the publication you are, the concept needs work in leading and teasing readers through the pages in order to provide an analogue for your ability to flick though a magazine in order to read it.

I do, however, love the way the tablet senses the reader picking it up, switching from displaying the cover to the inside pages. And, crucially, the the project does point to an ’e-magazine’ enabled future which absolutely takes the strengths of magazine design and editorial principles and builds on them. It rather emphasises the ’excited’ bit of the feelings I have for the coming revolution to my trade.