Last House On The Left 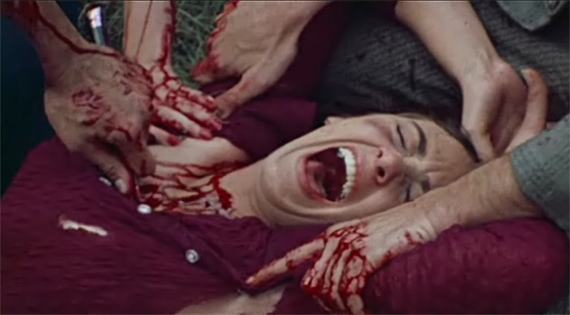 We saw the original Last House On The Left last night, a Lovefilm delivery which we’ve been putting off for a while, what with all the warnings of it being horrible.

And it was. For those unaware, it’s a horror film, the directorial debut of Nightmare On Elm Street/Scream creator Wes Craven, about the abduction, rape and murder of two girls by a cadre of sadistic criminals and the subsequent revenge taken out on them by the parents of one of the girls. It was famously banned from general cinema release in the UK and Australia in 1974, and when it was mooted for DVD release in 2002, UK censors wanted to make 16 seconds of cuts. The distributor appealed the decision, calling film critic Mark Kermode forth to present an argument for the film being left unsullied, but the case failed - in fact, the appeal committee doubled the cuts to 31 seconds. Oops.

Frankly, it’s a total mess - the acting is mostly abysmal, the script is wobbly and the editing is all over the place. The narrative jumps ahead several times with no attempt to explain what happened in between, and some juxtapositions of scenes are eye-watering, swerving directly from rape to excruciating attempts at comedy with a bungling pair of cops. It was, after all, the first film most of the production team and actors had made.

And yet it’s also brutally effective. Over all these failings, and after all this time, Last House On The Left remains nail-biting, its depictions of violence and cruelty unblinking. Craven’s intention was to show violence and its repercussions without shying away - a reaction to the bloodless violence of such films as A Fistful Of Dollars, in which audiences would witness the deaths of many characters but not see the true horror of each act - torn flesh and bloody retribution.

His attempt to explore the horror of savagery, from its immediate effects to how it inspires equally barbaric revenge by the the ‘civilised’ middle class parents, isn’t quite so effective, though, struggling to make itself distinct from the mess. Let’s just say that Ingmar Bergman’s The Virgin Spring probably did it better - it did, after all, inspire LHOTL, with its story (which actually originates from a 13th century ballad) all but identical.

I think its visceral potency is down to Craven’s essential talent as a director. There are many great touches, including a lingering shot of the rapists awkwardly brushing grass off their hands after the act and some powerful jump shocks, in particular when one of the fleeing girls suddenly meets with the machete of one of her pursuers. And for all the fact that the team originally planned the film to be pornographic, and for all the weird lasciviousness of the opening section, it ultimately does not sexually objectify the girls. The scene in which they are forced to strip is about showing their total vulnerability rather than providing salacious thrills.

Lovefilm encourages users to grade films using five stars. But I found it pretty much impossible to rate Last House On The Left. It’d be easy to dwell on all its many failings, but it has a raw energy which makes it impossible to ignore. Despite its own tagline, ‘It’s only a movie,’ I rather think it’s both more and less than that.